This apartment to rent in Paris is located in the Montparnasse district, two steps away from the famous Tour Montparnasse and its commercial centre. Sevres Street and Cherche-Midi Street are only 10min away and Rennes Street is close-by. You are very close to the St Germain des Pres area, ideal if you fancy shopping! You will enjoy being so close to hundreds of clothes shops, many cafes, restaurants, open markets, organic markets, theatre etc. Montparnasse area is lively but Armorique Street is a quiet street, so you will feel the atmosphere but from a quiet spot. The closest metro stations to this Paris rental apartment are Pasteur and Montparnasse. Standing Located on the 8th floor of a building with a lift. The access is secured by a first coded-door and a second gate with an intercom. The apartment has a balcony equipped with a table for two and from where you will have an exceptional view on the Eiffel Tower, the Sacre Coeur, etc.. The view is just amazing, at night you will see the Eiffel Tower sparkling, you will love it !

This lovely 37 sqm studio will be perfect for a couple. Should you be looking for a place for your honeymoon, this jewel will be the perfect spot ! The entrance gives on the main room through a small open corridor (where you will find a wardrobe to store your clothes). This room is very bright thanks to the large bay window. The main room has a living area with a coffee table and two armchairs. The sleeping corner features a comfortable queen size bed (160x200). You will find two dining table : one inside, and another on the balcony. The view from the balcony is astonishing. Right in front of view you will have the privilege to see the Eiffel Tower from top to bottom, on your right you will see the Sacre Coeur, floating above the Montmartre Hill, what a pleasure to have a glass of wine, waiting for the Eiffel Tower to sparkle at night%u2026 The fitted kitchen is open on the main room. The bathroom is accessible from the entrance hall. It is spacious and features a bathtub, a washbasin and a toilet. This apartment is such a beautiful and romantic place, it is comfortable, well equipped and organized, and most of all, the view on the Eiffel Tower is breath-taking. No matter if you know Paris very well or if you discover it for the first time, you will never get bored of this view !

Theatres, workshops, museums… This district has retained all its artistic effervescence. The Montparnasse district was named by students in reference to Mount Parnassus, the residence of the Greek mythological muses. It was later the scene of the intellectual and artistic fever that was the Roaring Twenties. The Montparnasse district then became home for artists such as Pablo Picasso, Guillaume Apollinaire or Ernest Hemingway.

Today, it is still the heart of Parisian dramatic arts with theaters such as the Montparnasse Theater, Bobino, the Gaîté Montparnasse or the Rive Gauche Theater. Following the inner ring road, an old railway line that once circled Paris, you will pass through the Plaisance district before joining the Petit Montrouge. Rows of architectural houses, pretty small buildings, redeveloped town houses, the villas of the district offer a wide variety of Art Nouveau and Art Deco facades. The vast glass panels of the Villa d’Alésia mark the presence of former artist and craftsman workshops, the last traces of an industrial past. After this beautiful walk, take a rest in comfortable spot in the 15 hectare Montsouris park.

This English garden shows many characteristics of a typical Haussmannian park: fake wood ramps, waterfalls and caves, intimate nooks and crannies and high viewpoints. Come here to admire the yellow Chestnut trees and Ginkgo biloba, and the 27 species of ornamental waterfowl. A getaway not to be missed! 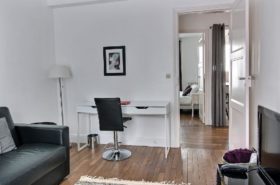 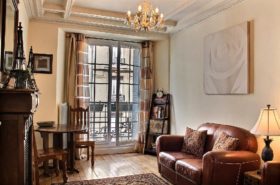