Welcome to the City Hall, completely renovated in the neo-renaissance style after being burned down during the revolution. In the square, quiet today, many executions took place at the time. Going up to the Pompidou Centre, whose architecture is one of the most emblematic of the late 20th century, rue Quincampoix is worth a visit. With its beautiful homes and town houses, it is one of the most picturesque in Paris.

Formerly lined with brothels, but also granaries full of butter and leeks for sale at the “Les Halles”market, it has kept some delightful facades, like the totally “trompe l’oeil” one at No. 27 . You might also enjoy a short break and even see a show, at the Café de la Gare at the end of Rue du Temple. Cross the Gay and Jewish neighborhoods full of bars, restaurants and trendy shops, to Rue des Oiseaux to reach the Marché des Enfants Rouges market. Built in 1615 with a metal structure and a large glass roof, it is one of the oldest covered markets in Paris and bears the name of a former nearby orphanage: here, all the children were dressed in red. 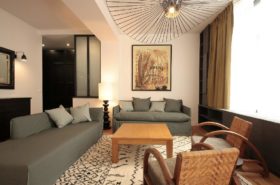 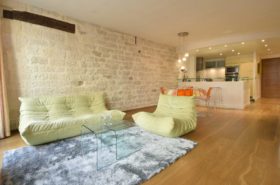