The historic Marais in the heart of Paris is one of the most popular choices for Paris vacations. Its narrow cobbled streets are rich with a contrasting trendy and traditional population, while the wonderful patina of the 16th and 17th-century buildings is sharply enhanced by the designs and colors of as many boutiques. Many apartments for rent here have period ceiling beams adding to the charm. The Marais stretches from the provocatively multi-colored Pompidou Center to the Place des Vosges, one the city's oldest and most romantic squares. The Marais abounds in funky bars and cafés, lively markets, irresistible delis and bakeries, high-quality restaurants, enchanting parks and gardens, and trendy art galleries all guaranteeing an unforgettable Paris experience!

This apartment is a perfect blend of rustic traditional wood detail finishings married with modern day amenities. It is a large one bedroom with an ample dining room table that is large enough to host a dinner party or spread out all the treats you bought during your day in Paris. Everything you need to enjoy your stay is inside: a fully equipped kitchen, a large dining table, a comfortable sofa, a well designed bathroom, and most importantly, a comfortable queen sized bed. The bedroom is spacious and has plenty of closet space to really make you feel like you are at home. The bathroom has a bath tub and shower and was recently equipped with a luxurious jet shower head. The windows look out on a courtyard ensuring peace and quiet at night. Perfectly located among the narrow Marais streets lined with cafés, restaurants and irresistible boutiques, you are well placed to experience the best of Paris! 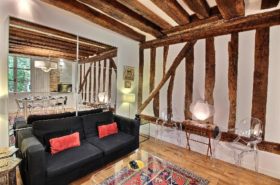 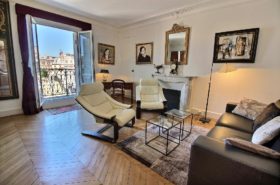 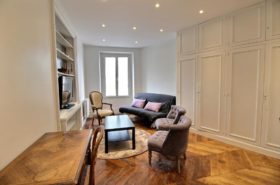 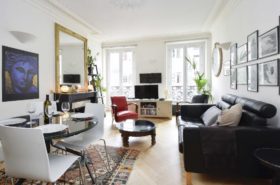